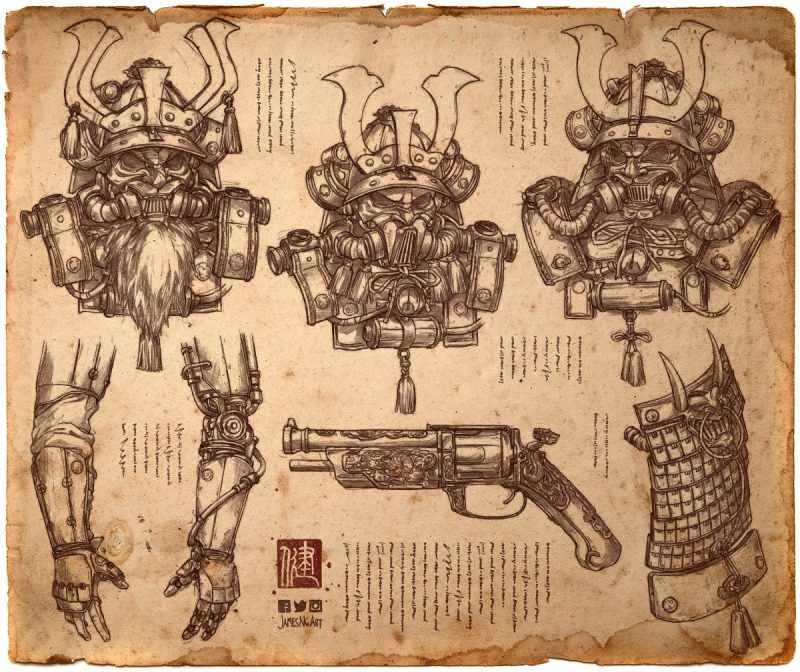 Okay, I’ve had some time to ponder this one, so it’s time I tackle it. Steamscapes is a setting I have worked on for many years, and there is a lot of intentionality in my choices. I haven’t always gotten things right, but I feel like I’m continuing to get better. More on that below.

As before, I will examine the politics of Steamscapes through its Premise, Action, and Presentation. (See the original article for details on these categories.)

Over the years, I have refined my short description of Steamscapes to the following:

There’s quite a bit there to unpack in terms of the game’s politics, so let’s break it down piece by piece.

Historical steampunk differs from other steampunk in that it tries to place the fictional elements of steampunk in the real world, at a real point in history. There are lots of steampunk games that are set in unrealistic worlds (often with islands of floating rocks, because why not). Often, creators use such settings in their games, fiction, or steamsona backgrounds to remove or ignore the many (!) problems that were endemic to Victorian-era Earth. These fictional worlds allow people to participate in the steampunk aesthetic without acknowledging the racism, classism, and above all imperialism that is baked into it. Setting a steampunk game on Earth is part of the process of addressing those issues.

Non-magical steampunk is surprisingly rare. Once you take away all the fairies, dwarves, aether-power, undead, floating-rock worlds, and super-coal (or ghost rock, as the case may be), there aren’t many games left. Most of the games that people point to as the iconic examples of the steampunk genre are inherently magical. It’s fine if you like to play these genre crossovers – plenty of these games are great – but they often hand-wave the resource and labor problems that become central to a real-world approach to steampunk. And the reason this is important is that resource and labor exploitation are problems that 19th century capitalism (and any capitalism for that matter) generate. Ignoring those problems is, in many ways, more fantastical than casting a spell. If your setting is all about Jules Verne and H.G. Wells but forgets Charles Dickens and Karl Marx, you’re missing some core truths about the Victorian age.

Post-colonial is different from decolonized. Decolonization only occurs when we respect and return both authority and financial independence (often in the form of reparations) to those whom colonialism has displaced. As a white author of European descent, I am unqualified to write decolonized literature. However, I can write post-colonial literature. Post-colonialism is about writing history and historical fiction with the full awareness of the damage wrought by colonialism and imperialism. It is based in the understanding that we cannot undo what has been done, but we also can’t do better if we ignore what was done.

All three of these inform how I have built the alternate history that makes up the Steamscapes world. Leaving any one of them out would make it more likely that I would fall into the common traps of steampunk settings: unquestioned imperialism, rigid class hierarchies, and erasure of marginalized struggles and accomplishments.

I also built in an additional check on the usual approach to alternate history writing. Most people think alternate history or historical fiction is created by “changing one thing and seeing what happens.” But the problem with “seeing what happens” is that the author’s unexamined biases take over. I decided early on that I needed to make my biases intentional and specific, so I developed a practice of “points to avoid” – historical events that I did NOT want to include in my history – and then I made sure to craft a history that would allow them to be prevented. Here’s a sample of the events I chose, and this list should display the politics of the game very clearly:

In selecting these events and others like them, my goal was to mitigate the forces of European and US imperialism that dominated the 19th century. I wanted to favor indigenous nations and marginalized immigrants wherever possible. This does not mean making things perfect for them – which would be its own form of erasure – but instead giving them a fighting chance.

Steamscapes sits more in the conventional adventure game space than many of my other designs. Savage Worlds is a system that favors frequent conflict, often violent, and the action of Steamscapes reflects this. Most if not all of the adventures I have published have some combat in them. There are certainly combats that can be resolved through stealth or negotiation – even some that work better that way – but there are also combats that cannot be avoided. Even in the setting’s history, there is a sense that some problems are solved through violence.

That being said, one of the most important concepts that I try to present through the setting information and the adventures is that no nation or group is inherently evil or good. Some may be currently working for goals that are morally or ethically worse in our eyes, some may treat people (both biological and artificial) worse than other groups or nations, but there is no simplistic “all the heroes are from here, and all the villains are from there” mindset. I actively reject that trope, often making player characters realize halfway through a story arc that maybe they were working for the wrong group. (Or possibly not – these moments are intended to spark in-character discussion and moral quandaries.)

The other action design that is unique to Steamscapes is built into its professional Edges and Skill restrictions. The Savage Worlds point-buy system offers a lot of freedom in character creation, but I wanted a little bit more role differentiation. This is not only for the play experience, but also to say things about the world. For instance, the fact that you can’t just freely take a point of the Piloting skill without having the Aviator profession makes that skill more valuable. Either a party needs to have an Aviator, or they need to pay for their travel. In terms of point investment, it is nevertheless easier to be an Aviator than a Gearsmith or Spark Wrangler, and that also says something about the differing processes in mastering different professions. A beginning Gearsmith needs to learn how to do many different individual things, while a beginning Aviator really needs to practice their trade.

By making various professions feel and work differently, Steamscapes also encourages a variety of approaches to problems. While violence is still part of the game, these diverse approaches often lead to more creative solutions than simply fighting through them.

Of the three categories, the Presentation of Steamscapes is the one that I feel deserves the most mixed critique. There are many things that we have done that I am proud of, but I have also learned so much in the past several years, and I know that there are many parts I could have done better.

In thinking about the writing – especially on the first book, but really in all of them – I usually only got through tier 2 of the Giant Robot of Offense. Rarely did I try to guide readers in how to play Steamscapes respectfully, and so the potential for harm was and is still there. As I look toward the future of the game, this is the area where I will be pushing myself the most.

As I worked beyond the first book (which was almost entirely a solo project), I did start to consult sensitivity readers and hire authors and artists with more direct experience with the regions being discussed. But I was still early in my understanding of how to make that happen. Even though I can compare the credits of a book like Steamscapes: Asia favorably to just about every other steampunk RPG out there, I also know that’s a laughably low bar. As I look at revising and possibly even restarting Steamscapes, I believe this is an area where I need to do much better.

Due to the help of my excellent pool of artists, I do feel good about the visual presentation of the game. They did a fantastic job of providing sample characters and scenes that are inclusive of a much broader range of experiences than the steampunk genre usually offers. We did this in the alternate history as well – raising up real historical figures that aren’t often featured in games.

Because Steamscapes represented my first serious attempt at layout as well as design, there are definitely things I have needed to improve over time. My early work was not great from an accessibility perspective, and also I made some font selection mistakes in terms perpetuating stereotypes. I realize now that “not as bad as others” is not good enough.

For a while, Steamscapes acted as a barometer of my growth as a designer, writer, and layout editor, and also the growth of my awareness of how a game and setting like this interacts with and is received by marginalized communities. However, it has been on hiatus for a few years, and does not currently reflect who I am and where I am in my understanding. I don’t necessarily need to erase what I did in the past, but I know that I could fix it. And because I can, I should.

With that in mind, I do want to keep Steamscapes moving forward – South America is next, and I already have ideas AND collaborators for that one – but I also want to revise some of what I have done previously. The exact nature of that revision is yet to be determined, but I hope to have some conclusions about that soon.

What are “Lovingly Handcrafted Roleplaying Experiences?”

All Games Are Political, and So Are Ours